I realized I never officially closed out the Favorite Place Contest results with a follow-up post of the results.  In March I held a friendly collaborative contest on my Facebook page offering a free giclee to the person who submitted the photo that most caught my eye and made me want to paint it.  I selected a photo of sea lions off the coast of La Jolla, California by Marjolijn Bekken. The painting was completed in late May, scanned in June, and displayed in the August Hoomaluhia Gallery show and December Oahu Open Studios event.  Meanwhile the promised giclee was given to Marjolijn for her outstanding photo.  She has my sincere gratitude.  It was a pleasure to paint the sea lions.

“Sea Lions” is a good example of the adjustments I make to an image when I paint from a photograph.  I like to take advantage of the strengths of painting, and veer off a bit from the initial photo. In this painting, I used a blue underpainting throughout the image which peeked through in the thinner areas of the painting throughout, giving it a sense of cohesiveness.  I made the colors slightly more vibrant, especially in the sea, and I brought the elements into sharper focus.  There are a few less sea lions in the final painting to help simplify the composition, and I chose to make the colors of each sea lion a bit more differentiated so they would stand out from each other and from the rocks.  I enjoyed the directionality of the strokes of paint, curving over sea lion shoulders and undulating with the waves. The whole painting had a very sinuous rhythm to it.

Lastly, I learned a lovely piece of trivia that appealed to my geeky nature side.  Sea lions are easy to tell apart from seals because they have stronger flippers that allow them to sit upright, rather than lounging on their sides like seals. Now that I have told you, if either of us see a seal or a sea lion, we can definitively identify the correct name for it – bonus! 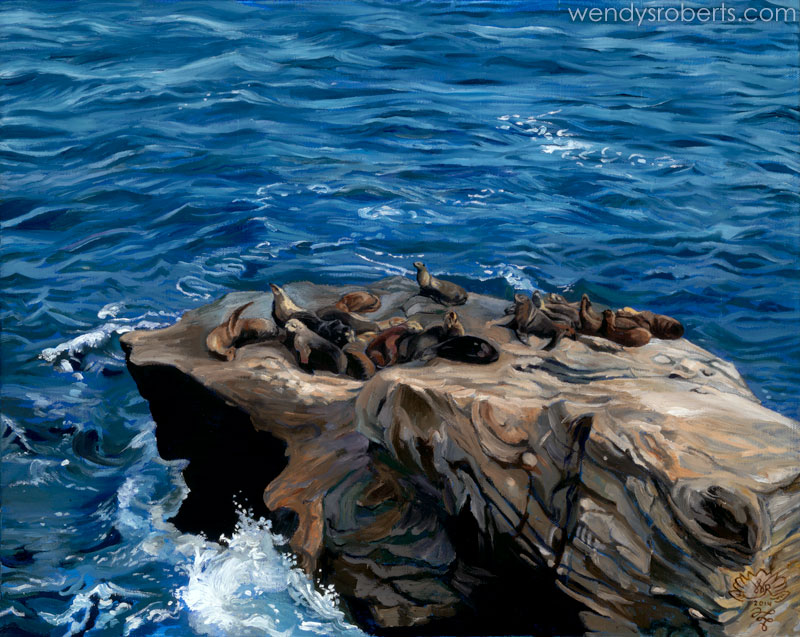