I have had a lot of people ask about my cement sidewalks.  When we moved into our home a couple of years ago, the sidewalks were incorrectly slanted, so we repoured all the concrete, and of course, being an artist, I did not want the sidewalks to be plain.  I had seen a technique at Kauai’s Allerton Garden, and Denver Botanical Garden of using foliage to imprint the concrete.

Photos from the botanical gardens that inspired my sidewalk: 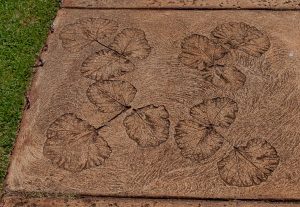 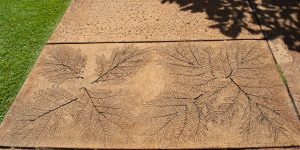 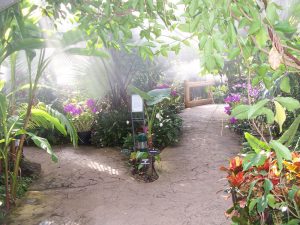 I set out to research how to do it.  There wasn’t much information out there.  I pretty much could only find vague references that told me to wait until the cement was firm enough to keep the imprint, but soft enough to accept the impression. When I told the cement crew about what I wanted to do, they were a little nervous at first, but quickly proved to be essential to the success of the process.  They were enthusiastic about the results since it is an affordable way to make sidewalks more decorative.

Here are the steps I took to make the imprinted sidewalk: 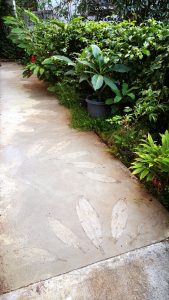