You probably heard the news about our false ballistic missile warning here in Hawaii. There was a lot of panic, but also a lot of cool heads too.  You don’t hear about the cool heads on the news.  It’s not very exciting compared to reporting about the very real panic a lot of people felt, but most of the people I know were concerned rather than panicked. Nonetheless, for those of us in the “concerned” category, it was still a very strange morning.

I woke up to the sound of my cell phone and my husband’s cell phone chirping in unison. The first thing I did was to wake up a touch annoyed.  We get flash flood alerts like that with the same alarm, so I thought they were going to tell us it was a flash flood.  I was preparing to roll over and go back to sleep, but then I saw the screen.  The missile alert was on the screen like the graphic below (this image is thanks to Tulsi Gabbard, who you will hear about later on): 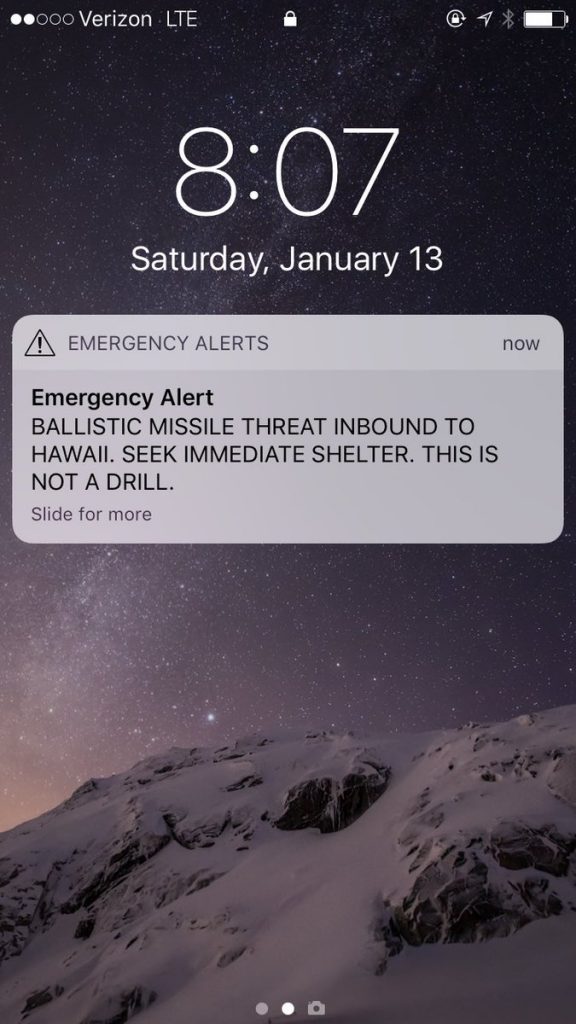 Like a dope, I got up out of bed and went to look at the sky because I am not a good morning person and it took about 20 seconds for me to realize that of course I wasn’t going to see the missiles – they take 15 minutes to arrive. All I could think of was “bzzzzzzz” (the brain equivalent of TV static) and then after another minute of squinting into the sky and trying to be sentient, I thought “How do I prepare for this?  Hmmm….”  I realized you can’t prepare for something like that past what you would do for a hurricane, and I was already passable with my emergency kit, so no need to worry about that aspect.  I remember being relieved and a bit embarrassed that I couldn’t think of any unfinished business or last desperate wishes that could be fulfilled in 15 minutes other than filling the bathtub with water. It made me feel uncreative.  Some people have the wackiest ideas of what to do with their last few moments of life, but I, who make my living being creative, drew a blank.  I also thought it was weird that North Korea would actually send a missile. I know they are always threatening, but they have lots of reasons NOT to actually go through with it – in fact it’s highly unlikely if you sift through the pros and cons.  Then I realized no sirens were blaring.  “Let’s check it out on Twitter to see if it’s false!”  The lack of sirens was fishy.

If there is one thing I have learned from being a night owl, it is that if you have a weird earthquake at 3 am, Twitter is the best place to figure out if other people know what is happening.  I don’t know what kind of magical server is running over there, but the second something bizarre happens, you can start searching for information, and usually you will have your answer in under 5 minutes from a reliable source – technology is wonderful!  I ran to Twitter to figure out what was going on with this alarm, and immediately got the word it was false from our local hero of the day, Tulsi Gabbard, who immediately confirmed the status of the alarm and sent out a very quick Tweet.

Many of us had moments after it was all over where we realized our lives were the everyday humdrum and we were so grateful!  It’s NICE to be stuck in traffic (sort of). It’s nice to fold laundry and have a list of errands.  It is a luxury to have routine everyday life unfolding. It is nice to know you have kissed your kids and given your family notification on a regular basis that you love them.  I felt squared away and spared and happy to be sweeping the floor. And I am also grateful to be able to take all the everyday stuff for granted too.  It’s nice to be able to relax into it rather than having to be acutely aware of all the beauty and all the multitudes of blessings we have in our lives every moment of the day.  I am grateful for the ability to take it all for granted.  That’s part of the charm of the “everyday” too.